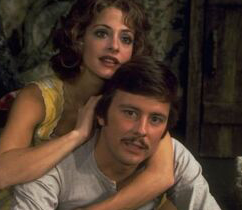 As the winter weather rolls in and the pandemic rages on, now is the perfect time to hunker down and get cozy with your favorite cast albums. It’s also the time when new releases usually become available from the current Broadway season. Sadly, new musicals are on hold for a while, but TMTP is here to introduce you to a few old ones you may have missed. Here are the staff picks for “hidden gems” they truly love, but have fallen through the cracks over time.

“It’s the Bock & Harnick musical that came right after Fiddler on the Roof. (How’s that for pressure?) Actually it’s three one-act musicals based on short stories: The Diary of Adam and Eve by Mark Twain, Frank Stockton’s The Lady or the Tiger? and Jules Feiffer’s Passionella. Most people including yours truly like the quietly charming Twain piece best (which includes the cabaret standard ‘What Makes Me Love Him?,’ but the three pieces are deliciously different, and that’s part of the fun — especially with a cast headed by Alan Alda, Barbara Harris and Larry Blyden.” – Bill Rudman

“While many are familiar with the song ‘Meadowlark,’ which has become a cabaret favorite, I love this entire score! Although the production never made it to Broadway and had a limited run in London, it is an achingly beautiful tale of love and loss and the power and limits of our desires and dreams. The 1976 cast album features Patti LuPone and Paul Sorvino. ‘Chanson,’ ‘Where is the Warmth’ and ‘Gifts of Love’ all add to the tapestry of the small French town and the Baker who loves too well and his wife who is torn between her simple life and the adventure of something more.”
​- Jodi Maile Kirk

“Bat Boy is a show I have been a fan of for a long time! It’s an American rock musical with  music and lyrics by Laurence O’Keefe, based on a June 23, 1992 Weekly World News story about a half-boy, half-bat, dubbed ‘Bat Boy,’ who grew up living in a cave and the family who tries to adopt him into their home. Hilarity and heart ensues. The script is hysterical and the music and lyrics are clever and fun, and each scene seems to provide a turn of events the audience is not expecting.”
– Bridie Srsen

“Okay, so not really a ‘hidden gem,’ but I  kind of feel like this musical got lost after Jesus Christ Superstar became so famous. Growing up Catholic, I always thought this show did a wonderful job of telling the story of the Gospel according to St. Mathew. The original 1976 Broadway production only received one Tony nomination for Best Original Score. It took 35 years to bring it back to Broadway in 2011 for a brief run that introduced the show to a new generation. While many have heard the song, ‘Day By Day,’ my favorite is ‘By My Side.'” – Heidi Lang

“This charming recording features Tommy Tune and Twiggy. It’s been a favorite since I saw it in Cleveland in the late 1980’s. This jukebox musical of Gershwin gems was co-directed and co-choreographed by Tune himself. Every song is a fantastic, funny feast. The delightfully satisfying mash-up of ‘Boy Wanted’ and ‘Soon’ is tops. With ‘Can’t Be Bothered Now’ & ‘Kickin’ The Clouds Away,’ this cast album leaves a smile on your face and a song in your heart!” – Debbie Schinker

“Based on the 1957 film noir, Marvin Hamlisch’s final Broadway musical is a dark story about fame and media that’s all-too relevant today. Featuring jazzy brass and sinister strings, the score is incredibly lush. Sadly, like many other shows in the 2001-2002 season, it closed prematurely due to low attendance across the city after 9/11. The musical did earn seven Tony awards including a win for John Lithgow and the recording is worth a listen alone for early performances by future Broadway stars Brian d’Arcy James and Kelli O’Hara.”
​- Joanna May Cullinan

“I wish more people in the general public were familiar with this 1997 musical. It was originally produced Off-Broadway, then later at Encores! and eventually on Broadway in 2014. The warm and accessible score is by the versatile Jeanine Tesori, of Tony-winning Fun Home fame. I especially love the original Off-Broadway cast album – Cleveland native Michael McElroy’s performance of the inspirational ‘Let it Sing’ is beyond compare. Interesting story, first rate performances, and the score integrates flavors of country, gospel, bluegrass, and Memphis blues.”
​- Nancy Maier